Is the indoor air quality at Thompson Rivers University in Kamloops safe?

By Michael - August 23, 2018
Forest fire activity in the Province of British Columbia and elsewhere during the Summer of 2018 has once again raised concerns about air quality and human health impacts. Although the Summer of 2017 had longer and more intense wood smoke pollution events in communities like Kamloops then this year, this Summer has seen larger spikes in pollution. For a comparison of the two summers and for a discussion on the implications of multiple years of smoke exposure, click here.

On August 23, 2018, smoke in the City of Kamloops returned with a vengeance.

The provincial air monitoring station at the Federal Building in downtown Kamloops recorded a one hour average for PM2.5 of 231.1 micrograms/m3 at 10PM.

Our PurpleAir network showed almost exactly the same levels across the "swarm" of low-cost sensors setup in the city. To learn more about how this technology compares to expensive government monitoring stations, click here. Additional examples comparing the network to satellite modelling can be found here.

Below are the PM2.5 readings for a sample of PurpleAir sensors from 10:18PM. The readings match very closely the provincial monitor's output. 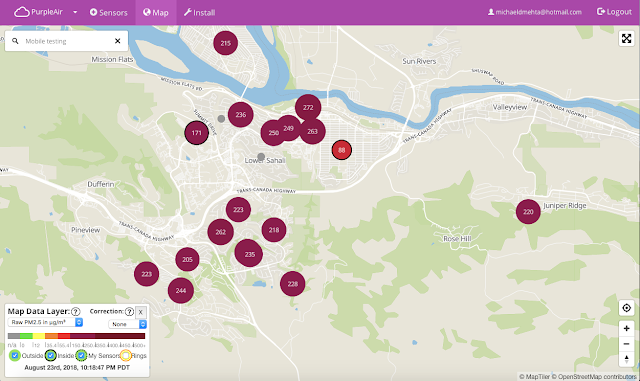 Starting with the Lloyd George sensor you'll note two general trends. First, on the weekend of August 18-19 levels of PM2.5 increased dramatically to over 200 and then dropped fast on Monday morning. Although PM2.5 levels were very high over that weekend they were still at high levels on Monday. It's seems likely that the HVAC system in the building was turned down to conserve energy over the weekend.

Second, with the significant spike in PM2.5 on August 23 it's clear that the HVAC system (likely on and in full operation) is managing to control reasonably well the indoor air quality. Using the spike for calculation purposes, the indoor air quality was maintained at approximately 50% of outdoor levels, and dropped down to the 35% range once it caught up to the rapidly changing conditions. 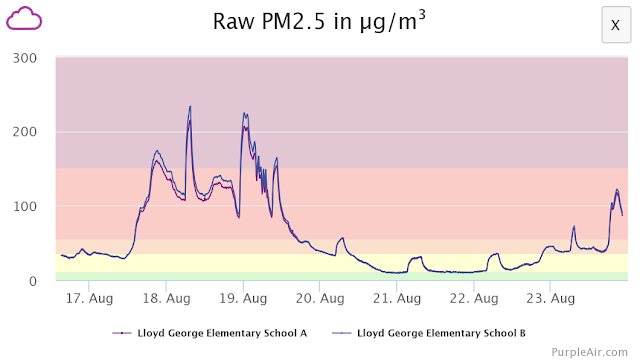 Turning our attention to the TRU sensor in the Arts and Education Building we see a similar pattern over the weekend of August 18-19, but with one notable difference. Although the levels in this building also peaked in the 225 range, the levels remained consistently higher over this period of time. More importantly is what happened on August 23 with the HVAC system presumably in full operation. The indoor levels rapidly increased to 200 compared to 125 for Lloyd George. The spike hit approximately 92% of outdoor levels (compared to 50% for Lloyd George). 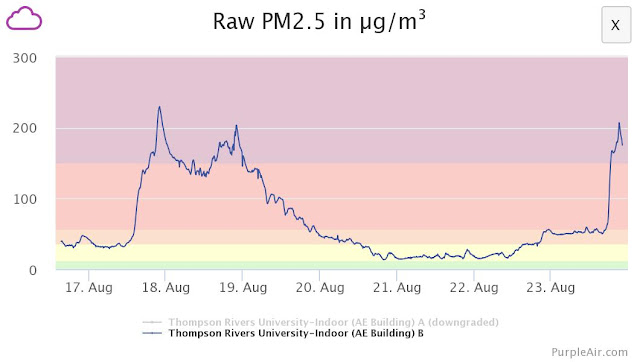 There's no doubt that wood smoke pollution from forest fires is unpredictable and challenging for any indoor environment to manage. That said, things can be better.

Here's an example of a house on Gabriola Island where smoke levels hit more than 250 micrograms/m3 this past week. This house is a regularly constructed home built in 2010. During the smoke events it had operating three inexpensive air purifiers available from Costco Online (Asept-Air brand), and heatpumps to keep things consistently cool at 20C. Of course, windows were kept closed.

There are two PurpleAir sensors at this location: outdoor and indoor units.

Here's what the outdoor sensor recorded for the week at this location. 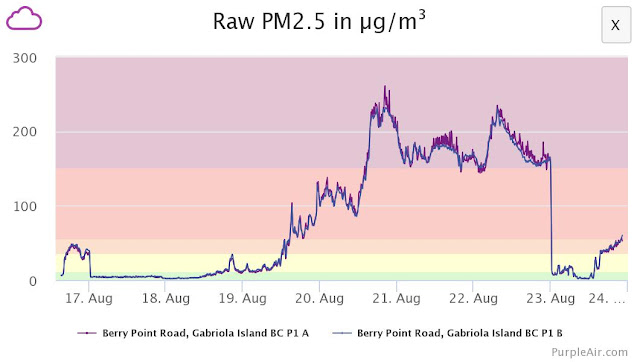 Below is a graph from the indoor sensor. 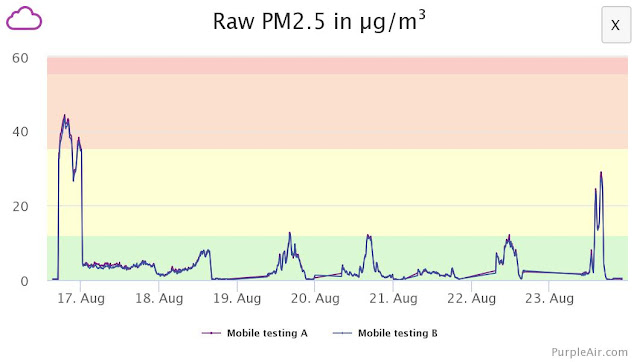 On August 17 the house was left unfiltered with windows wide open. The smoke came quickly overnight before the homeowners could react and take remedial measures to mitigate exposure. During this time, the indoor and outdoor levels were virtually identical.

The spikes throughout the week represent high indoor levels that required some compensation time for the air purifiers to reduce indoor air pollution. In all cases, the indoor system managed to keep PM2.5 levels in the 2-10 range.

On the morning of August 23, air quality rapidly improved and all windows were thrown open in celebration, purifiers and heatpumps turned off, and the owners of the house went out for a couple of hours. Unfortunately, the smoke returned quickly. Hence the spike on August 23 later in the day. Once back at home, windows were closed and all of this purification and cooling technology was turned back on. The indoor air pollution rapidly dropped and approached a reading of 1 microgram/m3.

Clearly, the technology exists to have safe and clean indoor air. The air quality in the Arts and Education Building is suspect in that the HVAC system doesn't appear responsive or aggressive enough to deal with rapid changes in outdoor air quality. Turning it off (or down) on weekends is likely a bad idea during the Summer when forest fires are raging. This example only refers to the one building on campus, and more specifically to one location in that building. Without real-time, distributed monitoring on a wider basis in all buildings, it's difficult to make more general conclusions about indoor air quality as a whole.