Showing posts from November, 2015
Show All

An interesting new company has been formed to market wearable environmental monitors. Check out the following video.
Post a Comment
Read more

Show the love, support clean air in your community

How clean are the emissions from a SUV? 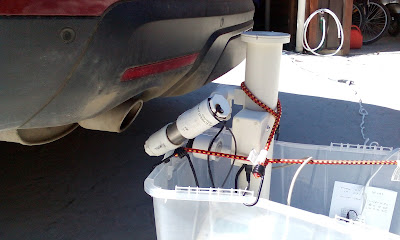 In August 2015 we decided to test the PM 2.5 levels from a 2013 Ford Explorer with a V8 engine. The nephelometer (Radiance Research M90 )  was positioned 15cm away from the exhaust pipe on a calm day. After several minutes of readings on a warmed up engine, the PM 2.5 levels ranged between 8 and 11 with a modal response of approximately 8.5. Here's a photo of the experiment. This shows us how clean vehicles emissions are when compared to woodsmoke fires.   Paradoxically you would be safer (at least from a PM 2.5 perspective) breathing off this tailpipe like a snorkel than  living near a wood fire like this where readings have sometimes hit 200 (ten times the provincial limit).
Post a Comment
Read more
More posts