How does the Summer of 2017 compare to this Summer so far?

By Michael - August 22, 2018
While much of BC is blanketed with wood smoke from forest fires raging across the province and elsewhere, there are some parts of the province that have been hit with bad air pollution more than others. This is due in part to terrain, proximity to forest fires, and other factors.

Although our network of PurpleAir sensors is rapidly expanding across the province, the highest concentration is currently in the Kamloops area.

Kamloops has had two back-to-back bad summers with smoke affecting the community.

How does the Summer of 2017 compare to this Summer?

Below are graphs from two of our many PurpleAir sensors in Kamloops dating from July 1, 2017 to August 22, 2018. We have selected one sensor at an intermediate elevation in the city (Hugh Allan Drive) and one at a lower elevation (Moody Ave) to show you some trends.

We believe that this target is way too high and many studies show that thousands of lives per year in Canada (and millions globally) are unnecessarily shortened by air pollution even at this level, and at much lower levels. There is no safe level of exposure to air pollution. 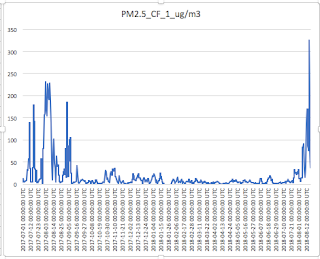 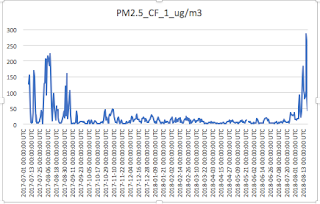 Here's what we observe from these two graphs.

First, overall the pattern is highly similar throughout the year+ period under review. When one sensor shows high readings, the other does as well and vice versa. The PurpleAir sensors are highly consistent and reliable and are good guides of patterns and relative change.

Second, the forest fire events for both summers dwarf air pollution in the city at other times of the year. The sheer amount of pollution during those months has increased dramatically the annual average air pollution that residents of Kamloops are exposed to.

Third, the duration of exposure to smoke in the Summer of 2017 was significantly longer and more continuous then what has been experienced this Summer (to-date).

Fourth, this Summer has seen days with considerably higher 24-hour averages with peaks approaching 325 at the Hugh Allan location, while the Summer of 2017 saw peaks hit the 225 mark.

It's difficult to determine which of these patterns is worse from an overall public health perspective. Longer periods of pollution at high levels are highly problematic, but larger spikes of pollution create their own problems. Air pollution has cumulative effects, and some may find this Summer appears worse to them precisely because of what they were exposed to last Summer.

What's clear is that residents of Kamloops are being exposed to particulate pollution like never before, and it's extremely important to watch population health trends carefully, provide solid and helpful advice on how to reduce exposure, to develop policies that reduce the overall annual burden bearing in mind that these kinds of summers might become the new normal.

Some may see this as justification for continuing business-as-usual. They may see the contribution of industrial polluters in the region, transportation, and even residential wood burning practices as inconsequential when compared with the smoke storms ushered in during this era that we will call the pyrocene. Now that these events are happening with (perhaps) some regularity [two years isn't a pattern per se] it's even more important to improve our air sheds, respiratory health, and to design sustainable and resilient cities and communities that do not contribute to climate change and air pollution.

By Michael - August 14, 2020
In August of 2016, the Gabriola Island Clear Air Society brought online the first PurpleAir sensor network in Canada. Our sensor network has documented extensively the staggering amount of air pollution coming from wood stoves and fireplaces on our tiny island. As the number of PurpleAir sensors expanded across the province and elsewhere in Canada, many began to raise questions about the accuracy of these low-cost devices. There have been several studies to-date that all show the same thing: these devices work, are accurate, reliable, and fill in gaps in air quality monitoring. The newest study from Australia by Dr. Dorothy Robinson provides definitive evidence that should quash any concerns about using PurpleAir sensors. See the study here .  Gabriola Island Clean Air Society director Dr. Michael Mehta has the following to say about this study. This paper provides empirical evidence to show that the use of low-cost PM2.5 monitors for measuring air quality on a distributed basis has me
Read more