By Michael - June 18, 2018
Many people incorrectly assert that indoor air quality is worse than what can be found outdoors. In some instances this can be true. Burning toast in the kitchen will most likely create short-term high levels of indoor air pollution, and chemical off-gassing from commonly found households products including construction materials can create hazardous environments inside your home. Mould and cigarette smoke can also contribute to this problem.

Between June 6-18, 2018, we ran two separate and identical PurpleAir sensors at one of our locations on Gabriola Island. Data was averaged over a 10 minute period and ambient (outdoor) air quality was quite good this time of year with only a few instances of residential wood burning in the immediate neighbourhood.

Below are the results. Each PurpleAir sensor has two built-in laser detectors, so we took the average of them to create a standardized data set. 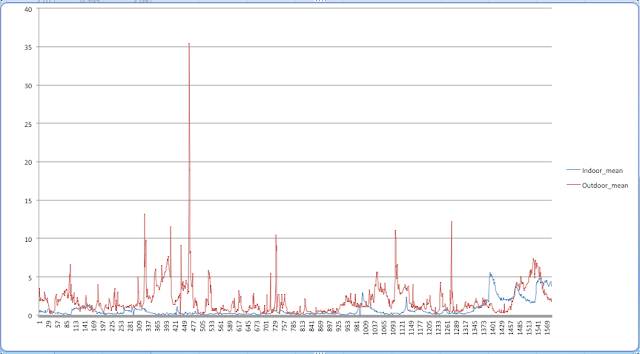 The mean indoor air pollution level for PM2.5 sized particles over the study period was 0.7 micrograms/m3, while the mean outdoor level was 1.88 micrograms/m3.

When the outdoor air quality is relatively good, we find that closed windows and a well-constructed home can minimize indoor air pollution from external sources. During the winter months when local wood smoke is at considerably higher level, it has been estimated that more than 80% of outdoor air pollution enters neighbouring homes including the home of the person doing the burning. We look forward to repeating this methodology in the winter months of 2018 and 2019 at various locations.