By Michael - September 19, 2016
The PurpleAir PM2.5 network shows in real-time exactly the contribution of wood smoke to the air shed. Here's a snapshot of air quality readings from just a moment ago from one of our sensors on Gabriola Island. Note the readings of the other sensors nearby and in Parksville. This is not industrial pollution, vehicles, road dust or anything else except a neighbour near this sensor who continues to burn wood in spite of the evidence of harm. Note the telltale pattern of combustion with cooling and the addition of more wood. 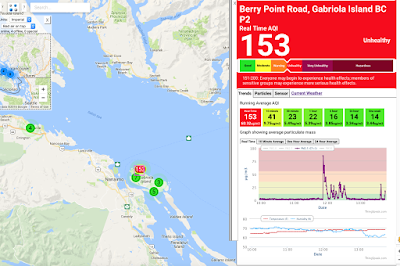 Also, compare this to the air quality reading from the same minute taken at a monitor close to the Harmac Pulp and Paper Mill in Nanaimo. 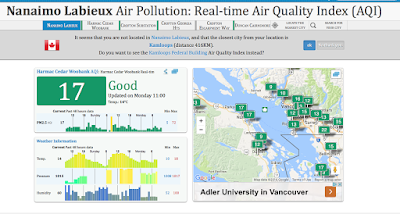