By Michael - April 16, 2020
Last night a state of emergency was declared in the Squamish area due to a new wildfire in the region.  By late Wednesday night it had reached 60 Ha in size. See the following article in the The Squamish Chief.

The smoke from this fire was detected by one of our PurpleAir sensors at 3:39AM (some four hours later) on Gabriola Island (approximately 80km away as the crow flies). All of our sensors on the island detected this smoke soon after.

The levels of smoke are in the 30-40 micrograms/m3 range currently (as of 9:16AM) on Gabriola Island.

Although still lower than what people are often exposed to due to wood stoves and fireplaces on the island, PM2.5 at even these concentrations can be challenging for those with breathing difficulties, and those with confirmed or suspected COVID-19 may experience a worsening of symptoms.

Here's another graph that shows you how to tell the difference between wood stove smoke and wildfire smoke based on these sensors.

Because of how wood stoves operate with start-up, operation, and reloading, the graph is very sawtoothed in appearance.

You will also see rapid and larger spikes with smoke that's physically closer to the sensor.

The other thing to look at is the solidity of the lines in the graphs. With closer source of combustion like what you would see from a nearby wood stove,  the two lines (one from each sensor) are more concentrated and overlapping.

The smoke signature from this distant wildfire has less of a solid appearance as the smoke ebbs and flows due to the ambient pollution it creates. 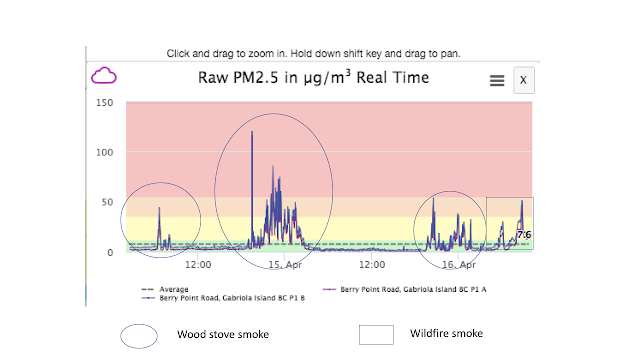